Logically, relations with the United States and with the powerful NASA were more advanced or more fruitful than the relations with the European countries, for the simple reason that in the space race United States was well ahead of Europe. In other words, and citing José María Dorado*, "INTA began in space before it had a formal presence in Europe". In any case, it is in 1960 when Spain approaches the countries that are working on the creation of the European Space Research Organization (ESRO), and that a Spanish delegation, including INTA staff, is present at the preparatory meeting for The creation of this body. The delegation, which attended as an observer, got Spain to be a member of ESRO, a precursor to ESA (European Space Agency).

As a consequence of this participation in this European organization is the creation, in 1963, of the National Commission for Space Research (CONIE), of which INTA forms a prominent part. As José María Dorado points out in his excellent work, it was political reasons that allowed INTA (and, through INTA, Spain) to enter into space research: the political interest of strengthening the relationship with the United States and the interest in being in Europe. 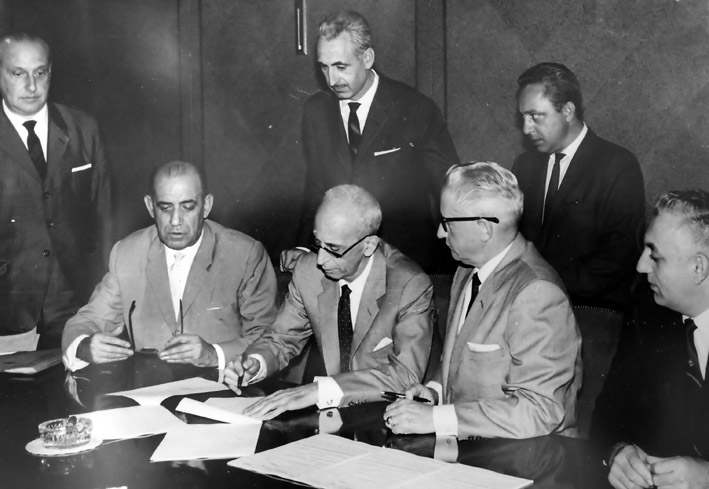 And in the sixties that are supporting the development of the Gemini and Apollo programs, a contract signed between NASA and INTA allows the incorporation of Spanish personnel to work in Maspalomas. Thus, in the last three years of the decade, the Spaniards who work in Maspalomas go from 25 to 42, and finally to more than 60.

But the Apollo project requires new media, and the network of tracking stations needs to be expanded with three new ones that will make up the so-called Deep Space Network (DSN), the world's largest and most sensitive telecommunications system. They will be located in the United States, Australia and Spain; The Spanish station, in Robledo de Chavela. The reason for this situation is that being separated by 120 ° of terrestrial length, it is guaranteed that, at any time of the day, any of the three stations receives the signal from the spacecraft. 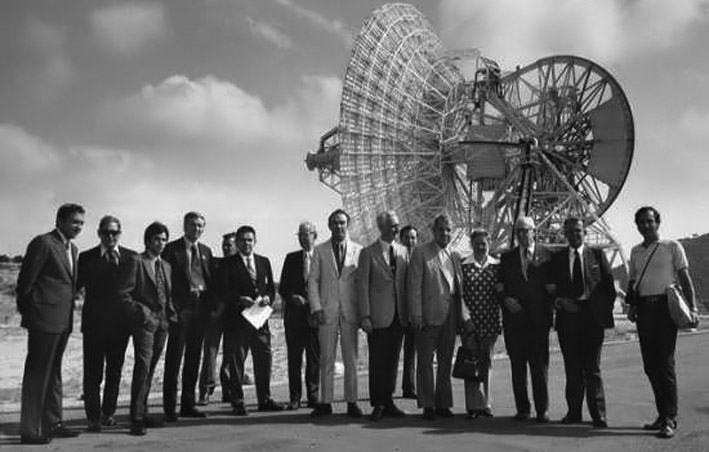 Fresnedillas station. Manuel Bautista, with dark tie, in the center

In this way, the station of follow-up of Robledo de Chavela was born, to which soon the neighbors of Fresnedillas and Cebreros were added. All have Spanish staff from the first moment. The Fresnedillas station collaborated in all the Apollo missions from the number 7 (first manned Apollo mission in orbit around the Earth), and was the one that was of service at the moment that the Apollo 11 landed on the Moon. These stations have progressively been directed by INTA: Cebreros in 1969, Robledo in 1970 and Fresnedillas in 1972.

In all these years, there have been numerous missions followed from these stations: the Mariner IV, then The Big Event; The contact with Apollo 11, which led man to the moon; The Viking spacecraft, which made contact with Mars; The Voyager 1 and 2, that have moved away more than 10 million kilometers of the Earth, arriving to leave the Solar System; The Cassini-Huygens, which have reached Saturn, the Mars Reconnaissance Orbiter, which is in the orbit of Mars; The Venus Express, joint mission of ESA and NASA. Even the Pioneer 10 signals are still received from the boundaries of the Solar System, even though its mission officially ended years ago.